The first thing that I did with the interior was to remove the ugly bench seat and replace it with bucket seats out of the GK Sigma SE. To do this I got my hand on a second set of sliders out of L200 wreck and after alot of cutting and welding, the seats went in. There is a hole that needs to be drilled into the floor at ther rear of the inner slider to mount them. There is a thread waiting for the mounting bolt under the floor once the hole is drilled. I assume that if a set of seats out of an earlier sigma were used, they would bolt straight in with out any cutting or welding. 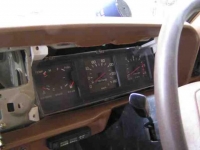 An Instrument Cluster from a MC 4×4 L200 was purchaced along with the steering column controls. The MC L200 was a Diesel so the internals needed to be replaced with thoughs from a petrol engine. This has been replaced with a tacho from a 73 Toyota Corolla with little modification as both use Nippon Denso Intrument Clusters.

I have also rewired alot under the engine bay plus I fitted an independant Head Lamp relay that all later Mitsubishi’s use. This has taken alot of work, and as the wiring loom got worse, I thought I better also use the decent Fuse Box that the Sigmas use! 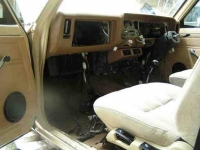 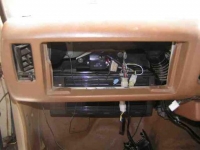 The aircon mounts far back behind the dash and stops it from being broken by the passenger from kicking it that happens if a aftermarket under dash type aircon is used.

I haven’t done much more to the interior yet.. I want to get the electrics finished before I start anything else.
To finish off the electrics I need to run all the elctrics into the doors, as stock, there is none. Fitted central locking into the doors already, next is the power windows. Check out the next page.