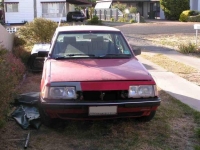 This is pretty much where the whole story starts.  I have owned a 1985 GK SE Sigma for about 5 years now.  It’s been a great car and it has cost me very little to maintain. 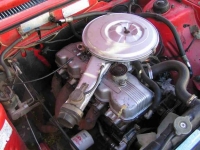 A big end bearing failed in the engine in 2002. I bought a wrecked GH Sigma that my mate owned and wrote off after about 2000K’s since the engine was reconditioned, and I fitted the engine out of that. It had been a regular work horse to get me to and from work for about four years, but in late 2004, the cylinder head became porous around cylinders 3 & 4.  I pulled the head off the original engine, replaced the Valve Stem Seals, and I ran great.  I test drove the car up to 120Kph and it was all over the road.  The frontend is worn out due to the accidents it has had in it’s life. (Two I have had, and I estimate another two before I purchased it).  When I replaced the head I noticed that it had been rebuilt with 20 Thou oversided flat top pistons.  I then decided that it was a waste using this engine in the Sigma, and decided it was time that I bought a ute and fit it with that engine.

The first and most common mod done to the L200s was already done about 10 years ago.  The L200’s came out standard with a 2.0L or even worse a 1.8L engine with a four speed gearbox.  It had already been modified with a 2.6L Astron engine.  These bolt straight in but require a few basic additions like rewiring for the Alternator to the LHS and changing the exhaust (so I am told).  Mine has had a 2.5 Inch Stainless Steel exhaust fitted, so it will be along time before I have to verify that the exhaust requires modding! The 5 Speed out of a scorpion will bolt straight in without having to change the tail shaft. 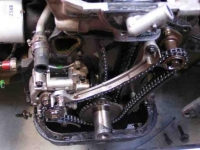 I decided that I better do one more mod to the engine before I pulled it out of the sigma so that I could ensure that it was worth it and road test it.  This is the ‘Balancer Eliminator Mod’

The Astron engine employ two balance shafts on either sides of the engine. One is below the intake manifold, and the other behind the oil pump. It is there to remove viabration from the engine. The side effect is that it takes alot of force to spin them up to speed and also drain power from the engine.

The kits are readily available from most good auto part shops, (and some bad ones), and should cost less than $100 dollars. It comes with timing cover gaskets, a shank to replace the oil pump balancer, a sleave to block the oil gallery on the top balancer mount, and a short chain to directly drive the oil pump. The modification is definately worth it, more power, more response. A side effect is that there is a viabration increase during acceleration / deacceleration around 2000-3000 RPM.

Still the pro’s out weigh the con’s!
The other mod that I have done is fit the Bosch ‘High Energy’ Ignition system of the GK Sigma. These were available on all Astron Engines from the GK Sigmas right through the rest of the Mitsubishis that use the Astron Engine.
It is a two wire dizzy with the electronic module mounted on the dizzy.
Two wires go to the Ignition coil, plus the High Tension Lead. 12 Volts to the positive side of the coil and it is done! 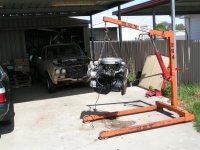 Engine Swap The poject had got to the point that no more could be done until the old engine came out and the new one went in. Everything went pretty well, I got both of them out in a split, but it was when I got to swapping the gearboxes that I found that both clutches were faulty. There was no way that I was going to be able to get a new clutch on a Sunday Afternoon, so I slipped just the engine in and returned the hired Engine Crane on Monday morning. 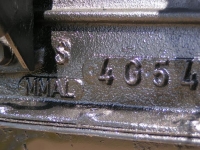 When I went to order a new clutch, I was told by the guy at Autobarn that there is about ten different Sigma clutch combinations. I didn’t believe him at first, but when we started measuring stuff up and read through the clutch books, I then did. Basically there is about 6 different clutch plate types available for the Astron engines. The main difference is between the MMC and Borg Warner. The input on the Borg Warners are about 10 Thou bigger than the MMC boxes. The PBR clutch book will actually tell you which combination is for which G/box. The Clutch Kit that I bought was a PBR exhange clutch kit, part number is R316.

It cost me $149. The Kit consists of a Clutch plate for a Triton to suit a MMC gearbox, thrust bearing to also suit a MMC Gearbox and a Pressure Plate to suit a 2.6L Astron Gen I Flywheel.

I also broke a gearbox mount while I was changing engines. These Mounts are nolonger available as a genuine part or an aftermarket part. So I am buying all of them that I see at any wrecker that I visit. It looks like these are the achilles heel of the L200’s now days, so if you own an L200 I suggest you buy a few spares. There are 4 different types in the 2WD’s (I don’t know about the 4×4’s), but all the difference is the height that they raise the rear of the gearbox depending on the chassis type you have. I have gone from one extreme to another and have managed to fit a 1 inch higher mount into my L200 and it still has clearance. 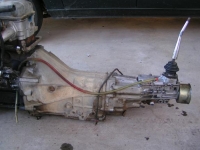 Gearboxes I used the 5 speed KM-132 Scorpion Gearbox that was fitted by the first modder to my L200, it was rebuilt 80,000 Km ago, and it is alot better shape than the one from the Sigma. This is a Scorpion Box on the right. (or an early Sigma box!)

O.K. The reason I am adding info about the KM-132 5 speed gearbox is because it raise a really heated thread on the 4G Forum. Basically a lamer said that all KM-132 Gearboxes are the same. This was said at a really bad time for the lamer that said it, as it was exactly the same time I had the engines a Gearboxes out of the L200 and Sigma. I took photos of the two and proved that there are different KM-132’s. 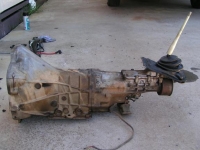 This is the Gearbox out of the GK Sigma on the left. Notice that the shift lever is mounted back further over the end of the output shaft. This means that you need to make sure you get the right 5 speed for the job or you will have to move the hole in your trans-tunnel! From what I have gathered about these different KM-132’s is that the remote shift types were fitted only into later Scorpion models and later Sigma models (GJ-GN). 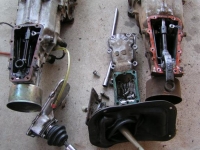 The gearboxes are the same, except they have a different arm coming from the main selector arm. You could change this, but you would have to rebuild the extension housing. 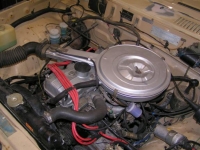 I have finished with engine mods for the time being until I get the ute on the road. Here it is on the left in it’s current state. I intend on fitting a cylinder head from a TR Magna as they have roller rockers and bigger valves. I also hope to fit a modified EFI from a Magna aswell. You can find some really good info on doing this mod at Marks Mitsubishi Projects.
Another good technical info site on the Mitsubishi 4G engines see: 4G Forum You will find lots of enthusiastic Mitsubishi fans that hang out at this forum that can answer alot of your questions.