I accept no responsibility for the following information!!!! In most states of Australia, modifications to steering mechanisms require an engineer’s certificate, or an inspection. I would also beleive that this is also the case in many other countries, you have been warned!

Power Steering seemed like the most needed mod that could be done, (even the leader of the oppostition…errm I mean wife, fully approved it without question.
Dodge Ram D-50’s in America come with factory fitted Power steering and Aircon. Some how in Australia we missed out.
The GK GSR Sigmas and some of the other rare Sigmas had P/S fitted, and there was a wreck out at the local wrecker.
$330 later, here is where I am up to. 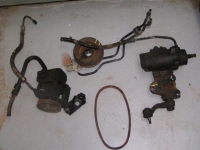 Here are all the bits I bought. A complete P/S kit out of a Sigma GK. I spent the day previous making sure that it would bolt to the chassis rail. It did, so the next day I bought the bits from the wrecker. 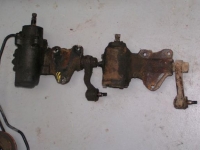 First things first, let’s make some observations. The P/S box is longer and also has a slightly different Pitman Arm. The Pitman Arm is not an issue right now, but may in the future when it comes to re-aligning the front end. We will take that step when we come to it.