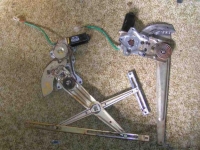 I got the idea after I discovered that the L200’s were imported into America as Dodge Ram D50’s and Mitsubishi Mightymax’s. The Americans were so lucky, they bought them factory fitted with Aircon and Power Steering… While I am still looking into fitting Power Steering, (I think I maybe able to take one out of a GK GSR Sigma, I’m still measuring it up) I decided while looking around the wreckers to attempt power windows. I started with getting the regulators out of a TP Magna as that was the only Mitsubishi’s the wrecker had that had electric windows. The picture on the left shows a Electric Regulator out of a TP Magna, with a piece of the bracket cut off in the center, and a L200 regulator at the bottom. 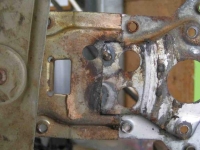 As you can see I have cut the L200 bracket in half to allow the Magna one to fit it. The Magna one is a little thicker and will fit over the shoulders of the bracket, but I have cut the center of it for the magna bracket to tongue into it. 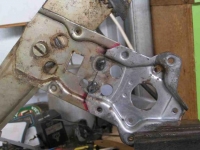 Here it is from the other side. 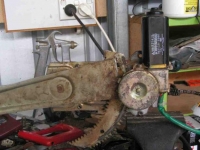 It works, the gear teeth are the same profile, but the regulator arm fouls with the motor! 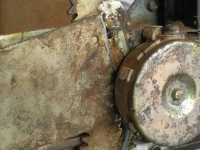 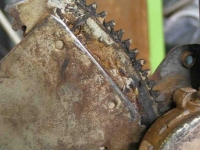 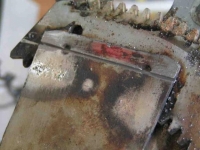 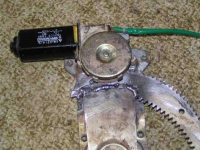 And Weld It back …(I had a good night at a friend’s party for NYE, and my welding has somehow suffered!) I hope that my skills have returned when I get to do the drivers side winder. 🙂 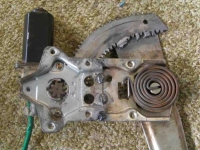 Completely finished regulator.
I still need to drill two new holes in the inner door panel, as the front mounting bolt holes have now been removed and move to the holes the are on the Magna plate, but that isn’t much skin off my nose. 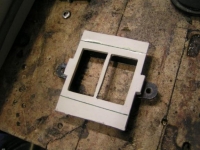 I considered taking the rear interior door handles of a magna to allow the mounting of the switches, but I decided to just make up a plastic panel and replace the coin compartment left of the stereo to mount the window switches in. 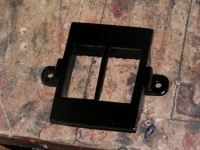 The panel Constructed. I cut the front off the compartment, but I traced around what was left of the front of it. That was a big mistake as I haden’t left space for what I cut off resulting in it missing the top and bottom of the panel. To glue this stuff together, ‘Super Glue’ just will not do. If you are intending on painting the panels that you make, use a solvent cement. Thats the stuff that plumbers use to glue PVC pipes together. It makes a chemical reaction, and melts the plastics together. 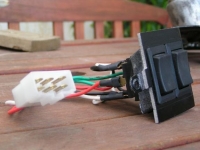 Painted and with a stack of spray putty to take up the gaps the glue left.

The Finished product. All wired up with the two switches and connector to fit.