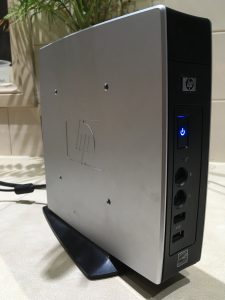 Like I really need new project, but a new one found me today. I visited the local recycle shop today – Around Again. It’s a junk shop conveniently located next the tip up here in Mildura and it is were things that are too good to be thrown out end up.

It is run by volunteers and all income derived from selling other peoples junk is put back into the business and employs many people living with a disability.

I’ve already found a few bargains here and today it was another. As I entered the shop today I saw a pile of HP T5540 Thin Client. A quick google search on my iPhone as I inspected the devices indicated that they were powered by a VIA Eden 1GHz Processor with 512MB RAM and 128MB Flash RAM.

What got me keen was that the device was powered from 12V DC. Most devices like this one and notebooks alike is that the current trend is for them to be powered by 18V DC. Living in sunny Mildura, I am keen to install Solar.
With the feed in tariffs not as rewarding as they one were, I’m starting small with a 12V LED lighting system powered by solar with the use of a battery for storage. Since the advent of LED, Lighting is no longer one of the big power consumers in the home.

To make it more viable, I’m considering powering other low voltage devices like mobile phone, tablets and any other devices that I can power with 12V, so a small computer like this fits the bill While it is fitted with a 12V, 4.16A power supply, it only consumes 15W at idle.

Long story short – I bought 4 of the Thin Clients…

On inspection this one had already been upgraded with 1GB of RAM. Storage with the T5540 is traditionally a 40pin flash devices, in this case 128MB which is normally enough to load up a sparse GUI with network and point it at a Terminal Server.

I just happened to have a 8GB Flash drive that fitted perfectly into it.  I originally purchased it for a  hacked AppleTV that ran Kodi, but it didn’t fit.  Amazingly, I still had it and knew where to find it two years later in a different city.

At the moment the plan is to install Debian Linux onto it along with a NAS application to backup our electronic devices. I am also hoping to use it for Home Automation.

We will see what these little devices bring, I have a good feeling the other 3 might end up in some Ham related projects in the future